First let’s concede that not everyone is built to withstand high level of volatility. It is far better to stay invested in a low return fund than to change strategy when things goes bad and reinvest after the market recovery. You must not be half convince of the below, but totally convince and go back to this article or to your saved thinking on the matter at the next crash to prevent you doing a yoyo.

Companies are concerned to maintain good credit level in order to have lower interest rate to pay for the future loan in order to be able to take on more profitable project. In case of bankruptcy, bonds gets repaid first and equity holders are often left with nothing. Thus bonds are safer than equity. Also, bonds have known interest rate when issued thus repayment fluctuates less than the value of the company.

However, no company would start borrowing at a rate of return higher than the project rate of return. If they did, they would get bankrupt. Thus rate of return of equity must be greater or equal over the long term than the borrowing (bonds rate). As an owner we can thus expect to receive more than the lender.

By spreading the risk throughout the entire market, you are no longer concern of any one company but to the overall risk. In a diverse index funds, bonds & Equity are protected against a catastrophic event. At this level though, there are still lot of fluctuation for equity. 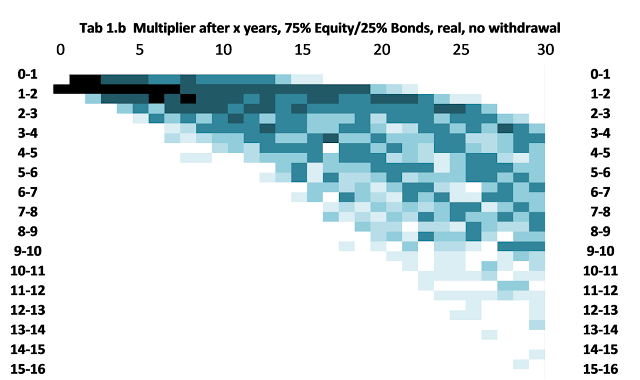 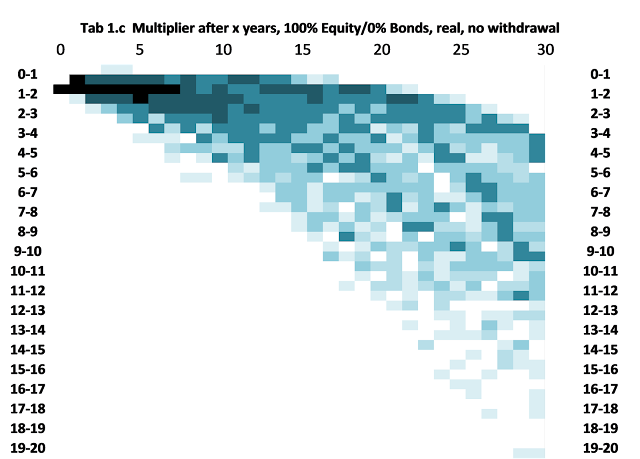 First, let’s concede that we do see some drop below 0.5x in the 0 to 5 years range in the 100/0 allocation that we do not see in the 50/50 allocation. If we continue our analysis, we get the summary table

Let’s first compare what happens in the 50/50 allocation vs the 100/0 allocation:


Perhaps a in between method would produce better results, however they are similar

You may raise objection that sequence of return risk or withdrawal will more than offset any gains without withdrawal. Let’s look at what happens if we adjust for a simple withdrawal strategy. Let’s withdraw 4% of the current fund and guarantee at least 75% of all previous withdrawal. This would be similar/or better than a SWR of 4% with a 3% floor. See the Tab 2 for the results.

First, let’s concede that we do see some drop below 0.5x in the 0-15 years range in the 100% Equity allocation that we do not see in the 50%/50% allocation. However, if we continue our analysis of it we get the summary table

When we compare these, we quickly see that results are well below the no withdrawal strategy. Indeed, we see the ugly head of sequence of risk. The 10-20 years worse years are more disappointing than before or after.

If you withdraw with the simple strategy of 4% of current fund (guaranteed 75%), the stats are worse. Only the 100/0 crosses the in the money point for the worst case scenario at the 30 years mark. The others do not have the luxury of getting even.

As my ode to risk, I hope I was able to convey the reason I think that a heavy equity allocation is superior to a 50/50 or even a 75/25 equity allocation. In the end, I would summarize my analysis as,