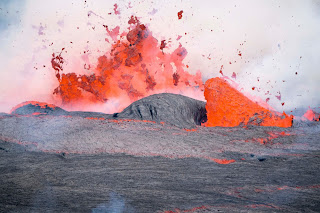 Like every so often we just heard of the demise of Facebook and Twitter both lossing about 20%. Facebook drop from 220$ to 175$(79%) in a day. Twitter gone from 42$ to 34$(80%).  My initial knee jerk reaction was: Wow, the whole market must have crash. At face value, this is yet another reminder that individual stock are very risky aka volatile price.

Did the market crash?

The market just did not care about these corrections. S&P500 was up by 1% during the last 5 days. NASDAQ who focus more on the internet industry slightly drop by 0.5%. Given an anual 7% return, we would expect a 5 days average increase of about 0.09%=1.07^(5/365). The S&P500 1% is 10x more this! The illusion of average and volatility makes the analysis more complex. At the end of the day, S&P will experience many 5 day 1% increase and decrease. Only on multiple years average is the expected rate of return start to emerge.

Why did Facebook and Twitter demise didn't move the needle? The impact of 1 or 2 companies over S&P (about 500 companies) is less than 1%. This is why stock diversification is so important. Even if Twitter and Facebook drop by 50%, the whole market would have only slightly adjusted to the event. If you have gone the active investing path, it is typical to invest in about 16 companies. A facebook loss of 50% would reprensent a loss of 3% a much bigger impact. A bigger impact would be felt, but both active and passive investing usually tries to mitigate a single company disappointing results.


Did these companies crash?

We may think that this is just a good reminder of the "danger" of individual stocks. As most article goes, individual stock picking is a dangerous exercice. Sure, if you have had bought one of these two stocks last week, you would have lost 20%. Individual stock varies quite a lot more than aggregated stocks. However, what the news often fails to report is the loss compare to 1 year or 3 years prior if any. In this case, Twitter would report a 150% gains in the last year and a 11% annualized return. Twitter were a big looser in the 2016-2017 and been an incredible winner since last year. 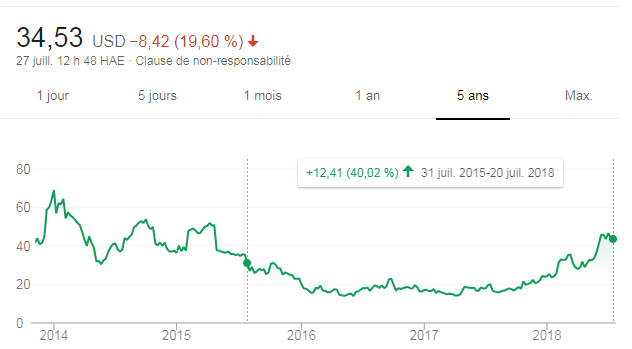 Facebook on the other hand face a growth of 3% this year, but a steady growth of 31% annualized over the last 3 years. The 20% loss barely made a dent in their growth of the past few years. 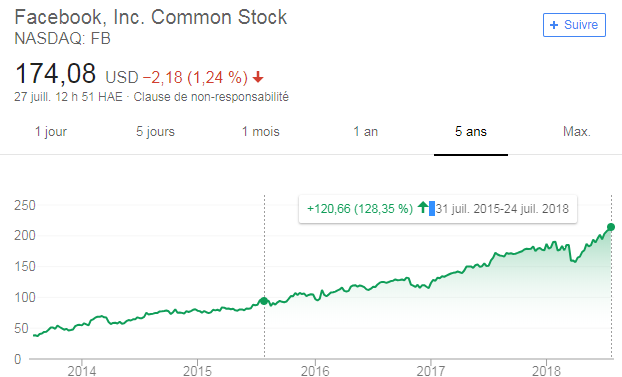 As a simple investor who rarely look at stocks and there returns track the media news feed or latest investment advice would lead to irrational takes on the market. In this instance based on the news, buying Facebook or Twitter may be seen reasonable since they may be at a discount. However, truth of the matter, a 20% discount would be less than having invested in either 1 year ago where no news occured. Doing market timing based on the news or investment advice seems to be a recipe for disaster.

I would recommand to buy global index if you are unwilling to do some major reasearch on the whole market. On the long run there have been no global index crash that have never recovered.

In the end, its funny to report that both Twitter and Facebook reported a solid last year increase in value. Even a 20% loss is meaningless in this time frame. Go for the long game, unless you are a bot!
à juillet 27, 2018 Aucun commentaire: