The shocking math of accumulation

The shocking math as to why vampires must be rich?

There's a two main mathematical formula that determines on average the expected gains of any vampires. The composed interest accumulation formula focus on the accumulation of a Lump Sum amount for a number of years. The other is the future value of a serie of contributions.

A vampire have thus a lot of possibility to becoming rich. Either he can invest a lump sum of money or a smaller contribution over a period of years. A third possibility is anything in between. Let's explore the vampire timeframe first of a 100 years of investing. 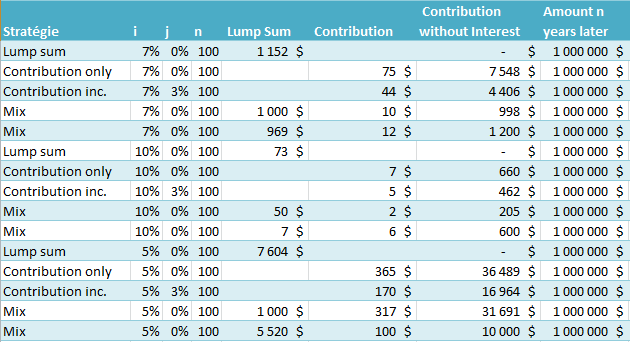 Knowing that the past last century rate of return for a all equity was in excess of 10%, a 73$ investment would be enough to be a millionnaire. Else, the vampire with less than 10$ to spare each year would be a millionnaire also. All in all, it's super easy for a vampire to become rich.

Over 100 years, it is staggering the impact of interest. It requires 50x more contribution to fund a million at a conservative asset allocation than an aggresive one. If we look at Lump sum, it takes 100x more lump sum to get there.

Now let's see over a human life of 35 years investment: 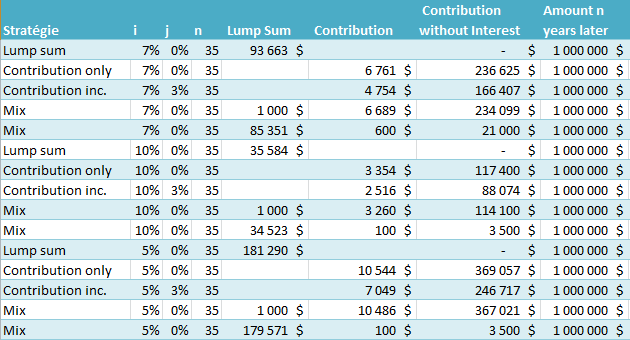 In order to retire a millionaire, we would require about 36k/94k/181k to compound to 1 million. The impact of interest rate is still very much felt.

The way I think about it, if you were able to split at your death 1,2 million and that you would have 3 childs and 9 grand-childs, then each grand-childs would be able to become millionnaire at age 65 easily. 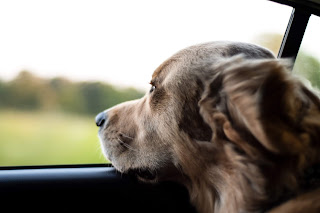 FIRE is an acronym for Financially Independent/Retire Early. That community looks to retire in their 30's or 40's. While challenging, it seems to be an attainable goal if you are willing to cut expense and save the remain. There's a few types of FIRE categories:

One of the challenge for the US is that their social security is poorly funded. Actuaries have asked for decades for changes in order to make the program sustainable. Major changes are still missing.The two mains venues is to cut benefit or increase contributions.

However, Canada programs are much different.  The likelyhood of serious reduction in benefits is close to zero. This article will explore the impact of the Canadian system on FIRE. Canadians have 4 majors social securities: GIS/OAS, CPP/QPP. For ease of reading, I only reported the 2018 numbers.

The Old Age Security(OAS) is not pre-funded. Instead it is an expense from the general revenues. There have been some back&forth in changing the retirement date, but the OAS pension remained the same 7,160$ per year increase by inflation (100% of CPI). It is safe to say that it will be there at your retirement. There's no impact on retiring early on OAS amount.

The Guarantee Income Security(GIS) is to insure canadians over age 65 a minimum pension. It is severly claw backs. At 18,096$ of income, the GIS is 0$. Reducing it, equals to taking away from the poor and old.This is a major reason why it should not go away.

For Fat FIRE, the OAS is going to be claw back based on income. It will start to be claw back at 75,910$ and will be completely claw back with an income in excess of 123,302$. These claw backs amounts are also indexed by inflation (100% CPI).

The RRSP/DB/DC/CPP/QPP are all vehicles which their withdrawal counts as income. However, the TFSA does not count as income for both GIS and OAS. While the maximum of 5,500 may be small, the sum of contribution untill age 64 is 253,000. If we account for an interest of 7%, that's 1,8 million each. If you are near the margin, an idea would be to first withdraw from RRSP. If you are able to live off RRSP until age 65. Then at 65 when the GIS/OAS starts, you can withdraw from the TFSA which is not counted against your income. You could thus aim to maximize the GIS or OAS payout.

The other strategy is to defer the OAS. This moves makes you ineligible for GIS. For each year of deferral, the OAS is increase by 7.2%. If you maximize this strategy to defer the OAS at age 70, that's 36% more. Also the OAS is increase each year by inflation (about 2%). Said otherwise, the OAS jump from 7,160$ to 10,751$. Using the current low interest rate, this is actuarially advantageous to do in general. If you are afraid of market downturn, this may be an advantageous flexibility.

Like your southern neighbor, the "Average Salary" is a reduction in disguise for FIRE community. In the US, the average is done over 35 years. In Canada, the years taken depends on years worked after 18. The average is done over #years working after age 18 * 83% for CPP or *85% for QPP. A CPP/QPP starting at age 65, that would be 39 and 40 years average. If you retire early at age 30, you would have only a maximum of 12 decent salary. Any 0$ income is thus an effective reduction to the full amount. On top of the standard reduction, that's an additional 30% reduction! 4,083$ instead of 13,610.

Thus if you are able to report a side hustle after age 30, that would improve drastically the CPP/QPP you would get.

If you were considering to retire on 20,000$ or less, it is interesting to see that CPP/QPP + OAS/GIS can easily returns at least that amount. The only difficulty would be to be able to successfully manage the withdrawal until age 65.

Fat FIRE usually implicates later retirement. If you retire at age 45 instead, the reduction is about 70%. Similar to the OAS, it is generally recommended to delay start at age 70 if you are expecting a high pension. That way the CPP/OAS is increase by 42%. If we takes into account the 70% and the increase of 42%, both roughly cancel each other. The wage adjusted CPP further improves the increase(about 3% per year). You would expect a 15,683$ CPP/QPP pension. Out of a 80,000 pension, that's  roughly 20% that you would not need to worry to fund.Thus you could pursue a more conservative approach to bridge until age 70 and then be assured to get the safety of a secured, improved and indexed pension.

Should we go with a "Roth conversion" Canadian equivalent?

However, Canadian enjoys the possibility to contributes to both at the same time. If you are able, you should maximize both accounts. Additionally, while it is possible to transfer RRSP to TFSA, the transfer do not create TFSA room. This limit the use of the conversion.

As presented in the TFSA strategies, you could try a strategy to minimize tax by withdrawing from the RRSP before CPP&OAS starts in order to minimize the claw backs. Also if you have room near retirement, you could switch the TFSA to the RRSP to get some tax deferred dollar just prior your retirement.
à août 07, 2018 Aucun commentaire: